S3 of Supergirl returns with ‘Legion of Superheroes’ which sees Kara trapped inside her subconscious mind. Reign tries to bring justice to National City by destroying those who have sinned. So, Mon-El and his team join together to try and bring her down.

This legion of superheroes is formidable and effective in weakening Reign, but the episode felt it should have focused on Kara’s recovery. 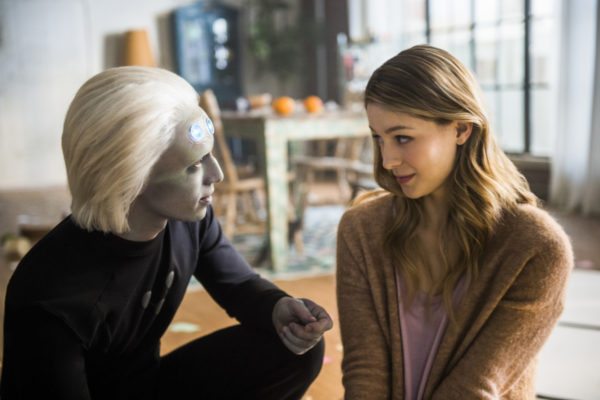 As Kara finds herself inside her most comfortable place in her mind, a new character, Brainiac, comes to her aid to tell her of her current state.

Kara’s fear of defeating Reign and her lack of faith in herself is compelling because her subconscious tries to deny her from admitting she is afraid.

It’s a chance to learn more about Kara and how difficult her childhood must have been on Earth. But, forming a friendship with an adorable cat is one way to heal yourself!

The formation of the Legion of Superheroes fits in nicely with this episode and hopefully, we will see more of them during the rest of S3.

Mon-El’s development is strong and his maturity and growth are lovely to see. It will be interesting to see Kara and Mon-El form a friendship after everything that has happened between them.

Another strong element to this episode is the developing relationship between Lena and James. As Lena points out, it could become complicated; Lena is a Luthor and James’ best friend is Superman. But, they shouldn’t let that stop them. Lena is so much more than a Luthor and nor should she be defined because of it. There is a wonderful comedy scene where J’ohnn pretends to be Kara when Lena comes knocking to check if she’s OK, after James says she has the flu to hide she’s in a coma.

S3 is her Time

Kara appears to be healing and learning from losing Mon-El. But, Reign is gaining more power and friends, (if you can call people who worship you, friends).

She is becoming an effective antagonist for Supergirl. There are biological connections between them and Reign’s human self is likely to feel huge guilt if she shares the same memories with her.

These qualities make Reign a compelling foe and her ideology of justice is interesting too because she genuinely believes she is helping National City. Time will only tell if Supergirl can persuade her to work together to save the city. A strong, engaging, funny and rich episode that develops Reign and Kara marvelously.

Katie Alford - Jun 28, 2022
0
https://youtu.be/AtLWtVKrcDY   For those Sonic fans waiting on the new remaster compilation of the first four Sonic games then it is out now. However, the prevailing...