Resolution of the Daleks – Doctor Who New Year Special

Resolution of the Daleks was okay, wasn’t it? Some unsettling bits, but generally alright. A good episode, but with some glaring lapses in judgement – specifically in the fact that a gay character was introduced and killed immediately, eliciting a “oh for fs sake” reaction from me. Obviously daleks kill people and pretty indiscriminately, too. Still the ‘bury your gays’ trope is hard to not notice once you know it exists and I just expect better of Doctor Who.

But, in amongst the good and the bad, what does this episode tell us about the way the series is heading?

The Anger of a Time Lord

The Thirteenth Doctor has not had a lot of chances to really show her emotional range. An argument can be made that most of the classic era Doctors had this same issue, too. But, since this is a modern show in the modern age, audiences expect a little more depth to their protagonists. Resolution finally shows us the Thirteenth Doctor at her most scared, and her most angry.

Whittaker does it very well and I hope we see more of that side of her next series. Thirteen also has a bit of a vicious streak which reminds me very much of Sylvester McCoy’s Seventh Doctor. She can lure you into a false sense of security, which she did a little during the series. While she’s very hopeful and optimistic, once she doesn’t like someone, she’s very blunt about it, which is a great aspect to her character. Will probably get her into all sorts of tight spots, no doubt.

The scene between the Doctor and the Dalek where they’re disabling each others’ instruments was especially engaging. As the Doctor flies through the vortex and one plan after another is countered, it was a brilliant dynamic. I’d like to see more of this Doctor having a battle of wits, trying to outsmart someone as smart as she is. Maybe the Master, or other really clever villain.

When this Doctor built her own Sonic Screwdriver it was perhaps a signal of the transforming identity of the show. Not only cobbled together from spare parts, echoing the legacy while becoming its own thing, it also taps into this notion of using available resources.

The Doctor is always pooling what she has, finding a job for all of her companions, and the others she meets along the way. It’s not only an ensemble cast, but an ensemble sonic. It has formed the backbone of the series this past year, so it seems appropriate that the Doctor’s biggest threat should use her own strength against her.

This does also explain why we didn’t see pictures of the Dalek in the promotional material.

This Dalek takes over human bodies, uses human vehicles, and human weapons (until it can find its own again). It, too, is pooling resources from various sources and using them all to serve a purpose. The main difference, of course, being that of consent. This is a subtler approach to the subject than, say, The Lie of the Land from series 10.

That being said, subtlety in other areas is not this episode’s strong suit.

Steven Moffat was primarily a comedy writer and that came across in his dialogue. Much of the speech patterns in his series were geared towards building punchlines in one way or another. Chris Chibnall is a little more of a serious writer, and I’m not sure he quite has a handle on his comedy yet.

There are some humorous moments, largely down to Whittaker’s delivery and performance. But other jokes do fall somewhat flat. While I appreciated what they were trying to do, I felt like they could have done with a little polishing.

The explanation for why UNIT can’t be involved was really interesting and necessary to stop the obvious questions. All it needed was the ‘UNIT has been closed due to a spending review’, with the Doctor giving an annoyed line about how she forgot that kept happening around this time in history.

Of course, the joke about the family unsure of what to do without Wi-Fi was particularly bad. It’s lazy and trite and could have been better used as a chance to show how people actually respond to having their internet go down. Young people do actually talk to each other offline, and fairly regularly. This stereotype of people glued to phones and not knowing how to socialise is a tired old trope that is not only wrong, but boring. 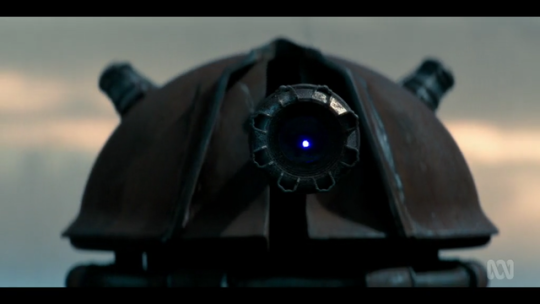 The Daleks have been made somewhat kitsch for the past couple of years. Steven Moffat treated them as slightly comedic for the most part, so this was an important episode to reestablish them as a threat. And to remind us all that they’re nazis and nazis need to be thrown into a black hole whenever possible.

Seeing a single Dalek, without its casing, causing so much suffering really gives the audience a reason to fear them. The horror of the Daleks isn’t in their shape, but what they represent. The persistent, unstoppable hate that will stop at nothing to conquer and destroy, wiping out anything that isn’t a Dalek.

Yes, they look like pepperpots with a plunger sticking out. But what makes the Daleks a threat is the terrible things they do. People are much the same.

I’m reminded somewhat of the 2005 episode Dalek, by Rob Shearman. Though that focussed on the Doctor’s relationship with the Daleks and how he processed his anger and trauma. Resolution only touches on this in teasing ways. But both stories do a lot to give us real reasons to take the Daleks seriously.

Do take some time to watch the interview I did with Robert Shearman about this topic. It’s very enlightening.

It’s also good to point out that being microwaved is not the silliest way a Dalek has been defeated in the show. It’s very quintessentially Doctor Who.

Alas this is the only Doctor Who we will be getting this year. I as I said in my series review, this year has felt like a trial and error. Chris Chibnall working out the kinks in his characters and concepts. It hasn’t been particularly ambitious or taken a lot of risks in the stories, with a couple of notable exceptions.

This special felt just about right and fits as a neat little series finale. It harkened back to much from The Woman Who Fell to Earth, and built on issues the series as a whole has been touching on.

What’s next for the Thirteenth Doctor and friends? Time will tell. It usually does.