‘For Good’ gives centre stage to Lena, exploring her Luthor qualities in a cunning and smart mission to get Morgan Edge to confess his crimes.

Alex helps Sam with her memory loss by conducting some medical tests, but all appears normal. Mon-El continues to show leadership, teamwork and selflessness as he helps Supergirl take down Lillian Luthor.

This episode is packed full of good quality action, drama and heart. After an attempt on Morgon Edge’s life, Lena has suspicions it could be her mother.

And she’s proved right as Lillian Luthor returns to National City. She reminds Lena of her Luthor qualities but instead of resorting to killing, Lena teams up with Kara to bring Edge down with a confession. 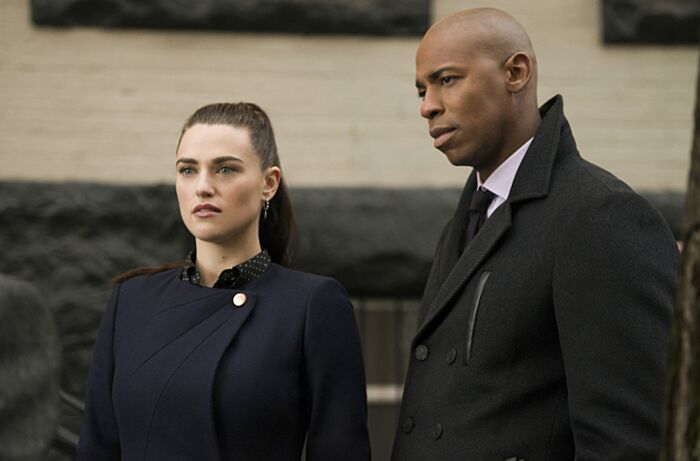 The conflict between Lena and Edge grows to a satisfying conclusion. Lena outsmarts Edge and knocks him out for good measure. It gave her an opportunity to also prove to her mother she doesn’t need to use her Luthor streak to make immoral choices.

It is fantastic to see Lena develop, her actions make every scene she appears in unpredictable and gripping. There are some wonderful scenes between her, Kara, Alex and Sam which proves they are each other’s strength and inspiration. It’s their friendship which inspires Lena to make better choices. The fall of Morgan Edge is hopefully one which will stay fallen. He doesn’t have many unique or interesting qualities to him and is a damn right tool that it’s no loss to see him leave from the show.

What his presence did give is to bring Kara, Lena, Alex, and Sam together. Sam’s story continues as the most interesting storyline this season. Her fears of not being able to protect Ruby if something happens to her is heartbreaking, especially as something is likely to happen seeing as she is Reign.  Could that be the choice Supergirl has to make? To kill Reign and take Ruby’s mother from her? I certainly hope that isn’t the case.

Family is the Anchor

Overall, episode twelve is a moving, smart, gripping and heartwarming story about the strength of friendship and family. It also gives Lena a chance to prove you are not what you are born into, but who you choose to be.

It touches upon the friendship and teamwork between Kara and Mon-El and the grace and beauty of friendship that looks set to be what ultimately will save the world from Reign.