Season 4 of ‘The Librarians’ is halfway through its latest season. But how is it faring so far? Is the story arc clear and original? Are the characters developing effectively? Let’s take a look.

The fourth season of ‘The Librarians’ is proving itself as a bold, confident and daring season. Eve and Flynn doubt their commitment to the Library as they rehearse the tethering ceremony.

Cassandra, Jacob, and Ezekiel also begin to doubt their own destiny as they contemplate the lives they could lead away from the Library.

In episode 5 ‘And the Bleeding Crown’, Darrington Dare, a Librarian from the eighteenth-century says there can only ever be one Librarian. It raises tantalizing questions about the rules of the Library and if they can trust it.

No Limits and No Rewards

This is key to the Librarians development and one which is ambitious and clever. It’s making this series more exciting and there are fewer restrictions on what the characters can do and think.

Executive Producer Dean Devlin stated season 4 is for the fans. This is clear in every episode so far. Episode 1 ‘And the Dark Secret’ reveals the theme of destiny as Eve and Flynn decide to tether to the Library. And a secret of the Library is the return of Flynn’s first guardian, Nicole Noone, who is the Library’s prisoner. 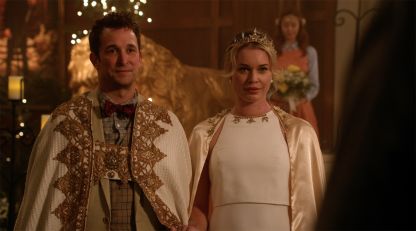 The secrets of the Library seem to be at the forefront of this season’s conflict.

As the Librarians doubt what else the Library is keeping from them, their trust is tested.

There is even a rift forming between Flynn and Jenkins. Flynn debates what other secrets Jenkins might be hiding seeing as he kept Nicole’s imprisonment a secret.

Episode 3 ‘And the Christmas Thief’ introduces us to Ezekiel’s family and reveals why he became a thief. It’s a festive filled delight but underneath there is a more personal story of a young man who wants his Mum to be proud of him.

There is some fantastic character development this season, especially in the latest episode ‘And the Disenchanted Forest’. Jacob falls for a woman who is investigating the Library, Eve is avoiding Flynn’s departure and Ezekiel argues with Cassandra about her lack of experience living a normal life.

This season is confronting the darker side of the Library and the Librarians. It’s been teased the threat to the Library might be inside the Library itself.

There is no loss of imaginative and daring situations the Librarians find themselves in. So if you haven’t seen ‘The Librarians’, I would highly recommend you share their adventures from season 1 to now as there’s too many good reasons not too.