As you may have seen Sony Pictures have expressed a “tremendous interest” in a Doctor Who cinematic adaptation. The leaked emails revealed on Wikileaks tell of plans for the next 8 years of the brand and that while “a film won’t happen in the next year to 18 months, but it is expected that it will happen after that within the 8 year horizon.”

However, it was also stated that, “The creative team on the show have been having the movie conversation with BBC Worldwide in recent weeks and are very hot-under-the-collar that their position on it is not being listened to or accepted”.

From Peter Cushing’s non-canonical films in the 1960s, to Paul McGann’s for-one-night-only outing in 1996, Doctor Who is no stranger to movie adaptation.

Cushing’s films may have lit up the box office for a time and sparked much of the ‘Dalekmania’ that swept both the UK and America at the time, but the series always reined supreme. Daleks – Invasion Earth: 2150, the second Cushing film, did remarkably poorly at the box office, however. This meant that the proposed third film, Daleks Vs Mechons (based on the serial The Chase, and presumably featuring the Mechanoids) was never produced. And Cushing himself failed to even mention the films in his autobiography.

McGann, though a popular Doctor, did not get the series the film ‘pilot’ had hoped for. Instead he went on to garner a gigantic fan base in the land of the Big Finish audio adventures.

The Eighth Doctor did make a brief comeback during the 50th Anniversary celebrations, let us not forget. The Internet exclusive adventure, Night of the Doctor, showed us, at long last, the final fate of this incarnation.

Doctor Who films have been mooted many times before and gone nowhere, let us not forget. Back in the 1970s, Tom Baker, the Fourth Doctor himself, along with Ian Marter (Harry Sullivan), wrote a script for a Doctor Who movie titled Doctor Who Meets Scratchman (alternatively Doctor Who and the Big Game).
Despite receiving a surprising amount of donations from fans eager to help Baker make the film, it never saw the light of day (and the money was returned). The story appears to have been about some demonic creature named Scratchman as well as various monsters and robots, culminating in a climax upon a giant pinball table.

Douglas Adams, famous for The Hitchhiker’s Guide to the Galaxy, as well as penning a number of classic Who episodes (while being the script editor for the series as well), pitched Doctor Who and the Krikkitmen. The story eventually became the third Hitchhiker’s book (Life, the Universe and Everything), with some elements ending up in The Key to Time saga. 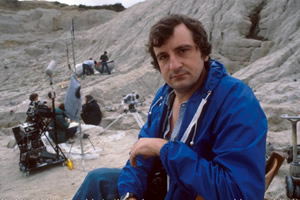 During the great hiatus of 1987 – 2005 a number of attempts to make films of Doctor Who seemed to go nowhere. With the exception of Paul McGann’s TV movie, of course. One such project had the intriguing title Doctor Who: The Last of the Time Lords. This would have been a reboot of the series, it seems, but it never made it beyond the planning stage.

Will this latest nudge in the direction of a Doctor Who movie see it through to the end? I am doubtful, but at the same time hopeful. In the right hands a Doctor Who story for the big screen could work. After all, we have seen episodes that almost reach feature length anyway – The End of Time, David Tennant’s final outing, has a run time of 130 minutes (spread over two episodes). Two-part stories and even hour long specials are nothing new here.

The right director, the right writers, and the right Doctor, and the possibilities look tantalizing. Peter Capaldi already has plenty of silver screen experience, so there’s no reason he could not be the Doctor to take it there. But, if we are talking about the next eight years, it may be another Doctor along the line.

We must wait and see. Time will tell. It usually does.